Same Sex Marriage and the Wedding Industry: Hype or Salvation? 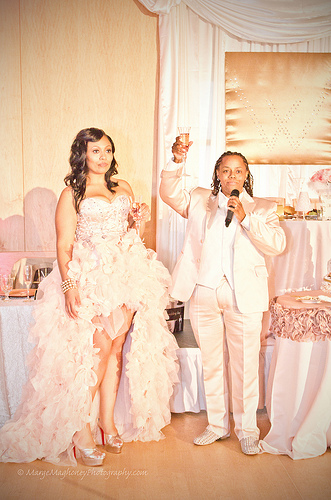 With the recent Presidential Election, as polarizing as it was, another equally hot issue made it way onto the books with the passage of laws in three more states legalizing same sex marriage.

This is great news if you support marriage freedom (like I do) and not so great news for traditionalists who oppose same sex marriage. Many wedding vendors seem to fall somewhere in between.

Here’s why you should be paying attention…

The Williams Institute studies clearly show that same sex weddings are good for the economy, and good for the wedding industry in particular.

Check out these stats:

Undoubtedly, it’s good for our pocket books. But what can you do to serve this new market?

Before you dive in and decide that same sex weddings are your ticket to more profits, there are a few things you need to consider.

Look Before You Leap into Same Sex Weddings

1. The same sex wedding market is too small to exclusively support most local wedding businesses.

Not all same sex couples will throw a big party when they get hitched. In fact, same sex couples typically spend less on their weddings than the national average. In addition, there simply aren’t enough same sex weddings happening in many local areas for a wedding vendor to serve that market exclusively.

Before you decide to specialize only in serving the same sex wedding market, be sure to investigate the number of these weddings happening in the market you serve. For most wedding businesses, it’s likely that same sex weddings will be an addition to your income, not a replacement.

2. Same sex couples want to be treated just like any other couple, but you’ll need to make some changes.

Gay couples often have a fear of rejection when hiring wedding professionals. If your website and marketing doesn’t appear “gay friendly,” they’ll pass you by.

You’ll need to make sure the wording on your website, in your emails and marketing is gender neutral. Instead of “bride and groom” they want to see “partners.” Similarly, the language in your paperwork needs to change. References to the bride only create the impression that you work exclusively with traditional couples, and same sex couples will be less likely to contact you.

You’ll also have to make adjustments to the words you use when meeting with the couple to be inclusive of all couples getting married, without being offensive.

3. Marketing to same sex couples can negatively impact your message with traditional couples in some areas.

I like to think we’re all open-minded and progressive, but that simply isn’t the case. When you cater to the same sex marriage market, there are some traditional couples who will be offended and turn away from your product or service. This is especially true in more conservative areas of the country.

On the other hand, embracing same sex weddings will score points for you with the more liberal minded, diverse heterosexual couples searching for a wedding vendor.

Be sure to consider the population and mindset of your marketplace before taking action.

What do you think about the impact of same sex marriage on the wedding industry?

15 thoughts on “Same Sex Marriage and the Wedding Industry: Hype or Salvation?”