How to Create a Viral Wedding Video

Have you seen it yet? 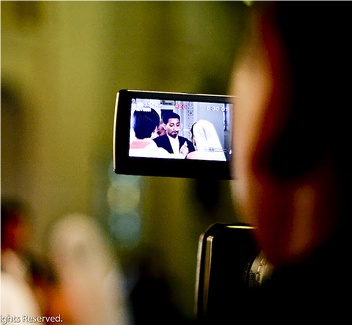 It’s the “Best Wedding Video Ever,” a parody music video of “The Time (Dirty Bit)” by the Black Eyed Peas that was filmed at the real wedding of Joya and Emre at the Terranea Resort in Rancho Palos Verdes, CA.

Not only is this an incredibly fun, cool wedding video (which may just inspire a trend of “music video” wedding videos) it went viral. While that’s an amazing thing for the filmmaker, David Robin, his experience shows wedding vendors like us how to create viral content to promote our own businesses all over the online universe.

David was gracious enough to grant us an exclusive interview. Yes, we got to him before the Today Show.

The Story of a Viral Wedding Video

The couple, Joya and Emre, really wanted to film a concept video spoof and play it at the wedding reception, but when time and resources grew short, they brainstormed the idea of creating their own “music video” starring their guests and shot right at the wedding.

Naturally, this required quite a bit of planning and required building an extra hour into the wedding timeline. David worked closely with wedding planner Amber Gustafson to ensure that the shoot was executed smoothly and with very little impact on the wedding itself. You can read more details of the wedding on June Bug.

“It was a tough, stressful shoot.” David confessed with good humor. “Not for the faint of heart. I had no idea it would go this big!”

What impact has this viral video had on David’s business so far?

When we asked David how he pulled this off, he replied humbly, “It’s luck, really. If the media outlets think it’s fun and fresh enough to promote, they will.”

But I dug a little deeper to uncover the critical actions David took to create a viral internet phenomenon that will launch his wedding business to the next level.

1. Choose a Subject with Broad Appeal.

Of course, the piece should be excellent to begin with and have high entertainment value. But David took it a step further.

He consciously wanted his video to go viral, so he set out to create a commercial piece that would appeal to a large audience and also exceed the bride and groom’s expectations.

David already had a presence on Twitter, Facebook and his own blog. He tweeted and promoted his project before the wedding day to build local buzz. Then he shared it on his blog and in the social media.

3. Submit Your Work to Wedding Blogs.

David submitted his wedding video to June Bug Weddings. It was as simple as sending them an email about his unique wedding video and offering to give them an exclusive. They loved it!

It also helped that he, the event planner and the photographer are all members of June Bug.

David had the video footage edited and ready by the time the newlyweds returned from their honeymoon a week later. It was up on his blog and released to the internet universe with their stamp of approval immediately.

His speed leveraged the bride and groom’s excitement about the wedding and increased the video’s newsworthiness.

It also helped that both the bride and groom work for Universal. Clients or vendors with high profile connections can get your work in front of the right people.

The key to “going viral” is getting your promotional piece in front the people Malcolm Gladwell calls “influencers.” Influencers have an audience of fans who follow them; they report the trends and spread the word.

Certain wedding blogs (Offbeat Bride, Style Me Pretty) and celebrity professionals (Preston Bailey, Martha Stewart) have this status in the wedding industry. But there are other influencers locally and nationally. If you can get your work in front of them and it piques their interest, they’ll spread the word much further than you can.

David didn’t hog the spotlight for himself. He got the couple, the event planner and the photographer involved. He made sure to promote the Black Eyed Peas and even placed a link to buy the song in his video posts.

Whatever you’re doing to promote your business, include other wedding vendors and businesses and involve your clients so that you can pool your connections and spread the word together.

“Go for it!” he says. “There’s a huge element of luck. But keep going for it if it’s fun and interesting for you to do. David’s hope is that this video sets a precedent. “Most of the viral wedding videos, like the Chris Brown video, were shot by amateurs. This is the first professionally shot video I’ve seen that’s gone viral. It really shows what a well-produced video can do for clients.”

While you might not get 660,000 views or even 100,000 views of your showcase piece, by following these viral principles you will increase your reach and leverage the power of the internet to promote your business.

So be inspired! Your wedding video or photo montage could be the next “Best Wedding Ever.”

9 thoughts on “How to Create a Viral Wedding Video”